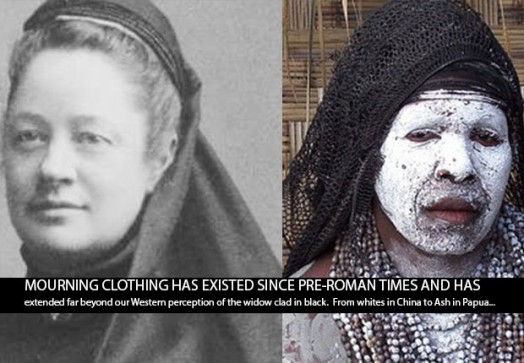 For the first funeral I went to, I wore apricot. I thought about black but that seemed so somber. I never really understood why a funeral, or even death for that matter, couldn't be more of a tributory celebration. So I wore an apricot Chanel suit, because she would have liked that.

Black is seductive yet melancholy, but for our Western minds, the only color that really seems to associate itself with death. The final darkness rather than light. In fashion, it's chic and tough and urban but in mourning, it's sad. A blanket covering its wearer in emotional darkness with none of the veneer of dominance. It is interesting to note that colors ranging from yellow to blue to white to purple are all globally allied with different regions and perceptions of the funerary rites of passage, and largely female responsibility of bearing its social representation. Grieving is often such a solitary and stoic process in the West and black, for me, reveals self imposed isolation from life and celebration. So these outward manifestations in fashion choices both isolate/d family members (widows more specifically) and also unite/d them where words failed.

The custom of wearing black, however, seems to date back at least to the Roman empire where black togas, toga pullas, were worn while mourning. Into the Middle Ages and renaissance, widows wore black caps with veils attached. In Christianity it is thought that it represented the biblical earth as our bodies return to ashes. While still, it is common in Latin America and the Mediterranean to see widows wearing black for the rest of their lives. The association of black with mourning in the West most likely originates with a Roman concept that cloaking oneself in black could prevent the haunting of the living by the deceased. The color black also best represented the Victorian act of mourning because for them it symbolized the absence of light and in turn, life. It was an immediately recognizable sign that a loved one had departed this life.

I remember when my grandfather died, my grandmother eschewed this all as morbid nonsense. Nonetheless, one of my most vivid memories of Sardinia were the hunched figures of tiny elderly widows cramped in even tinier doorways outfitted entirely in black. It would have seemed wrong for them to have been wearing anything else.

Despite our association of death and mourning with black, however, historically in medieval Europe as well as in contemporary India, white is and was the deepest color of mourning. I like this a little better somehow. For me white is a color of rebirth and purity which represents the end of life as much as the beginning.  In 1393, Parisians were treated to the unusual spectacle of a royal funeral carried out in white. Since, this white mourning attire has been referred to as deuil blanc. This royal tradition survived in Spain until the end of the fifteenth century. In 1993, it was revived by the  Queen Fabiola of Spain for the funeral of her husband, King Baudoin of Belgium. Carrying this tradition forward, the four daughters of Dutch Queen Juliana all wore white to her funeral.

Our American ideas of appropriate funeral attire, like many of our customs and rituals, seem to stem from 19th century England. By the 19th century, mourning behaviour in England had developed into a complex set of rules, particularly harsh for women. Victorian women donned heavy black crepe gowns from head to toe which were referred to as widows weeds, waed having been an Old English word for garment.

Victorian mourning fashion was primarily directed towards widows. For the first year, a woman who was in mourning was not allowed to exit her home without full black attire and a weeping veil. Attendance at any social function other than church service was forbidden. Not only did mourning attire show devastation of the widow but also the social rank of the family. Servents in a wealthy household would dress entirely in black with the passing of a household member, while some would simply wear an armband as did babies. Dying clothing black and then bleaching them out again was quite common. The industry of mourning became so vital to tailors that rumors were spread concerning the bad luck of recycling funeral attire. Business always remains business.
The least of all requirements of mourning dress was color. The entire process of dress during the 19th century in both England and America was an intricate and ritualistic process. A widow was expected to remain in mourning for over two years which were broken up into stages:
Full mourning
a period of exactly one year and one day, during which time a woman was to wear simple black clothing absent of any jewelry or ornamentation. During this time a weeping veil was always worn. If a woman was forced to remarry, it was only after the full mourning period had passed. Even some women who remarried, continued to wear black clothing.
Second mourning
For the nine months following full mourning, minor ornamentation such as fabric trim and modest jewelry were allowed. The clothing was still required to be simple in construction and the veil was worn back rather than over the face.
Half mourning
Half mourning lasted from three to six months and minor use of color was allowed. During this period, more elaborate jewelry was allowed.
Full mourning for both children or parents of the deceased generally lasted for six months while second and half morning each lasted three, for a total of one year. Parents-in-law skipped full mourning entirely for second mourning which was followed by one month wearing lilac. My mother and grandmother always told me that lilac was a morbid color. I never understood this as I found it complementary to my excessive pallor. I suppose the idea of lavander being morose came from somewhere even if no one knew exactly where that was. Incidentally, purple is the color associated with funerals in Thailand.
The rules were gradually relaxed, and it became acceptable practise for both sexes to dress in dark colours for up to a year after a death in the family. By the late 20th century, this no longer applied, and black had been widely adopted by women in cities as a fashionable color.
Mourning Dress, 1823-1825, Victoria & Albert Museum 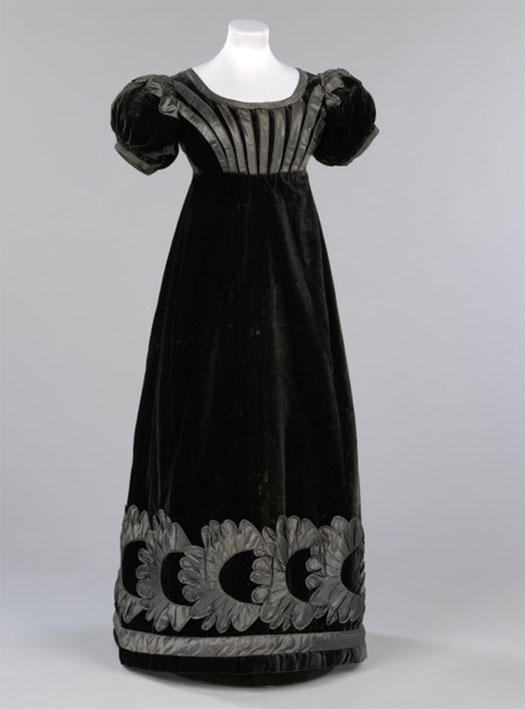 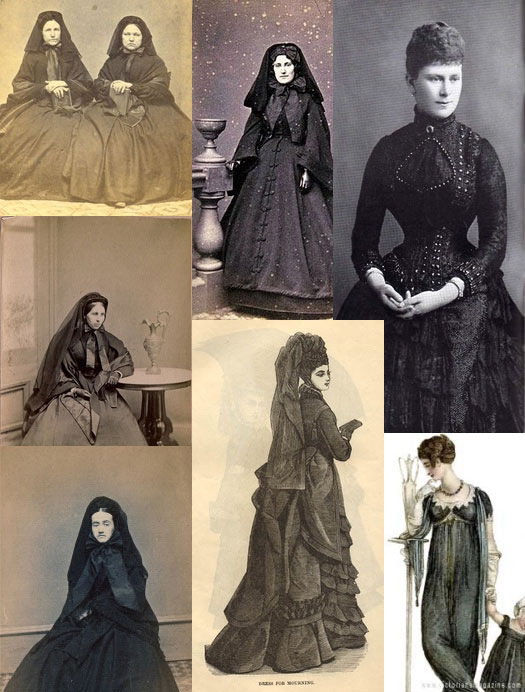 Mourning Fashion Around the Globe

Clearly this is a subject matter that could not be exhausted if I spent the entirety of my days in devotion to it. It is interesting, however, to get a glimpse into the association of costume and mourning ritual in non western tradition.

After the death of a loved one, the Japanese were mofuku. Traditionally in Japan, as in most countries where Buddhism is practiced, white was the color of mourning. As Japan westernized, black slowly began to dominate as the color associated with death. Today the term mofuku, refers both to black western style formal wear as well as traditional Japanese all black kimono. White is occasionally still worn as well. The maximum additional adornment for women would be a single strand of white pearls. the traditional mofuku is comprised of an all black kimono, obi and accessories worn over white undergarments. Traditionally, one colored item would be added daily until the all black (or white) was replaced by a colorful/patterned ensemble.

There is no other circumstance is which a traditional mofuku is to be worn. Men are to wear a kimono which can also be used for highly formal occasions. It is comprised of a black kimono with white or gray hakama trousers and white undergarments and a black jacket. Generally, only the immediate family and close friends of the family wear traditional attire while other funeral attendees wear western style or formal Japanese kimono. 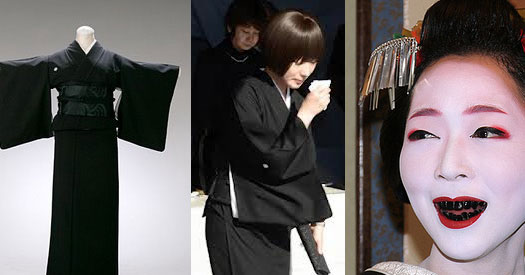 Tonga
The influence of Christianity has brought with it the color black as the funerary color. Black bunting is hung from buildings of the deceased and family members were black Ta'ovala. in the case of the death of a royal family member, the entire country is expected to replicate the mourning fashion of a deceased relative. Appearing in public during this period a taʻovala (mat tied around the waist) is much recommended, and it should be during that time a mourning taʻovala. When attending the funeral itself, it is obligatory. The kind of mat worn depends on the relationship to the deceased. Close relatives who are "inferior", in kinship terms, or "brother's" side, wear old, coarse, torn mats, sometimes even old floor mats. These are the relatives who do the hard, dirty work at the funeral. Relatives on the "sister's side", however, wear fine mats, often family heirloom mats. Those who are not related at all should wear fine mats that are fakaʻahu, or smoked over a fire until they are a rich mahogany color. 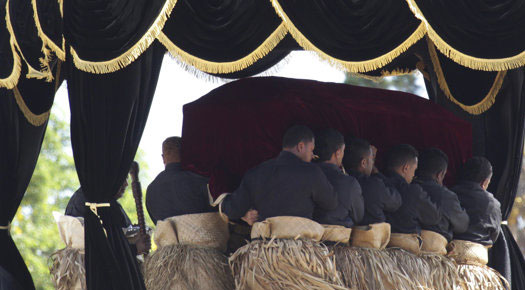 China holds a spectrum of colors when it comes to mourning. At the burial, people who attend the funeral may be given a white towel to wipe away any perspiration. The white is a sign of thanks. Following the funeral, everyone who attended must burn the clothes they wore to the service. This precaution is taken to prevent bad luck connected with the death. During the period of mourning, family of the deceased wear a piece of cloth on their arm for 100 days.  The color of the cloth tells the relationship to the deceased. The children of the deceased will wear a black cloth, blue by the grandchildren, and green by the great grandchildren. Families who hold to tradition may wear the cloth for nearly three years following a death in the family. Seven days after the death, the departed’s spirit is believed to return home. So the spirit does not get lost the family will place a red plaque outside of their home. At the wake, no one may wear anything red, as red is a color of happiness. 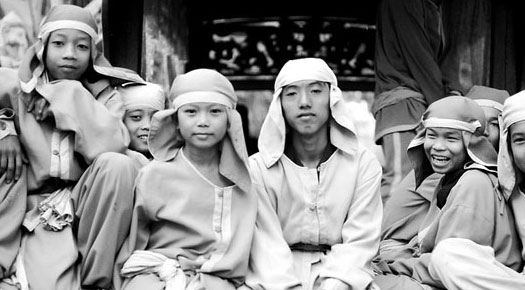 The indigenous tribe of the Danis inhabit the fertile lands of the Baliem Valley in West Papua, New Guinea. As one of the most decorative and well-known tribes in West Papua, they’re also given credit for an unusual and gruesome ritual involving amputation. As a way of displaying their grief in funeral ceremonies, the members of this tribe, will voluntarily cut off their fingers. This ritual was thought to both appease the spirits and to symbolize the sorrow and suffering due to the loss of a loved one. Women would then cover their faces with these ashes to express their sorrow and grief of that loved one. 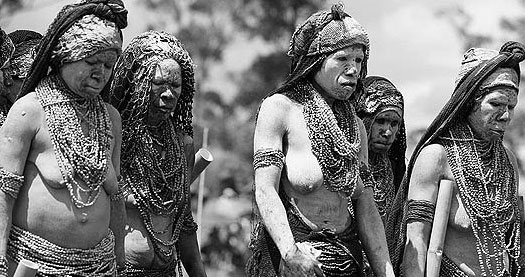 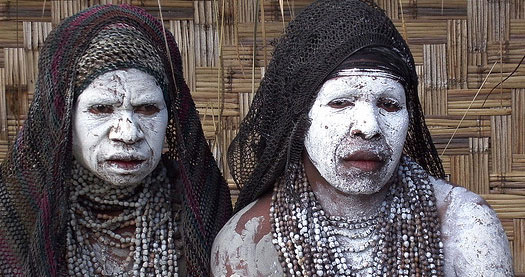